DeKalb County owes a photographer by the name of Olin W. Chase its gratitude for recording the glory of Fort Payne’s Boom Days. Chase, originally from Vermont, resided in this area between 1889 and 1893. He arrived sometime that spring to create photos for the Fort Payne Coal and Iron Company. In 1890, his images appeared in a 52–page book, “Fort Payne Illustrated”, published by the Fort Payne Coal and Iron Company to present the realization of the promises made in the company’s 1889 prospectus. Chase’s photos recorded such sights as men stripping an ore mine, ladies washing laundry, a miners’ encampment, New England investors in their finest after arriving on an excursion train, and the opulent DeKalb Hotel. Chase captured the town’s “boom” in photographs, no doubt helping to market Fort Payne as a favorable investment. Photography during that time was very arduous and only for professionals who were capable of carrying the heavy equipment, mixing the often toxic chemicals required for processing the plates, and having their own space for a darkroom to print their images.

Most of Chase’s images of Fort Payne were lost from the time he left Fort Payne until 1952, when a boarding house in which he stayed was demolished and his 6 ½-inch x 8 ½-inch glass negatives were discovered. In 2010, the Brown Family and Walter Raymond donated their collections of the glass negatives to our organization. Landmarks is extremely grateful to John Dersham, photographer and Executive Director of DeKalb Tourism, for using his expertise to produce new prints from the 121 year old glass negatives.

These images by O.W. Chase are treasure for our community. Very few places in Alabama would lay claim to such high-quality images representing that era. I was very proud to print them. – John Dersham

Landmarks of DeKalb County is pleased to announce that we are offering select photographic prints by O.W. Chase for purchase. All photographs will be printed from digital files, produced from Dersham’s scans of the original glass negatives. These images are unaltered and are meant to show, not only the everyday life of Fort Payne’s “Boom Era,” but also the tangibility of the photographer. There will be discolorations, finger prints, scratches, and other distortions on some of the images.

The images are sized 11×14 and will be printed on matte paper. Prints are available for purchase at $25.00 each. 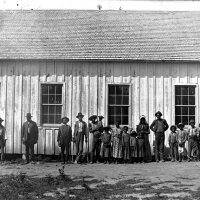 Donation via paypal from your visitors